The dangers of a positive outlook.

If you are planning to retire in the near future, there’s a good chance that you’ve used a retirement calculator.  Whether you found it on a financial website, your company’s 401k portal or were shown the results by your financial advisor, the purpose is the same.  These tools are designed to tell you if you are on track to meet your retirement goals.  While they vary in complexity and level of detail,  the accuracy and margin for error of these tools is of far greater concern.  If you plug in your account balances, Social Security Primary Insurance Amounts, future income needs and retirement date and the calculator tells you that you have a 100% chance of not running out of money, does that really mean you have nothing to worry about?

If you are a true pessimist, you will scoff at the notion of any future event carrying a 100% probability of outcome.This projected certainty defies logic in almost any forward looking conclusion.

While the size of your nest egg, fixed sources of income, age at retirement and other inputs will have a great influence on the retirement calculators output, they may be overshadowed in importance by a less obvious factor.  The assumptions that the calculator uses for market returns, inflation, future tax rates and other key variables may be the difference between the prediction of a rosy future or certain failure.

Depending on who is providing the calculator or output assessing your retirement readiness, their intended outcome may color the output.

A financial services firm from whom you purchased or may purchase products and services from does not have much to gain by exposing the weaknesses in the plan that their products and services have helped to assemble.  Rather than showing how your plan could fail, they may have a vested interested in assuring you that it should succeed.

Some online tools allow you to control the underlying assumptions used in forecasting future outcomes.  Yet,  how these assumptions are used can dramatically impact the outcome they create.  Let’s say you think it’s safe to assume that equity markets will return an average of at least 4% per year.  A surprising number of tools will turn around and project that equity markets return 4% every year.    Even if the 4% assumption is correct or proves to be lower than the actual average return you experience, this assumption offers almost no predictive value.  This is due to the impact of sequence of returns as illustrated below:

Each of the following scenarios features an average return of 4%. If you started with $100,000 here is what you would end up with in each 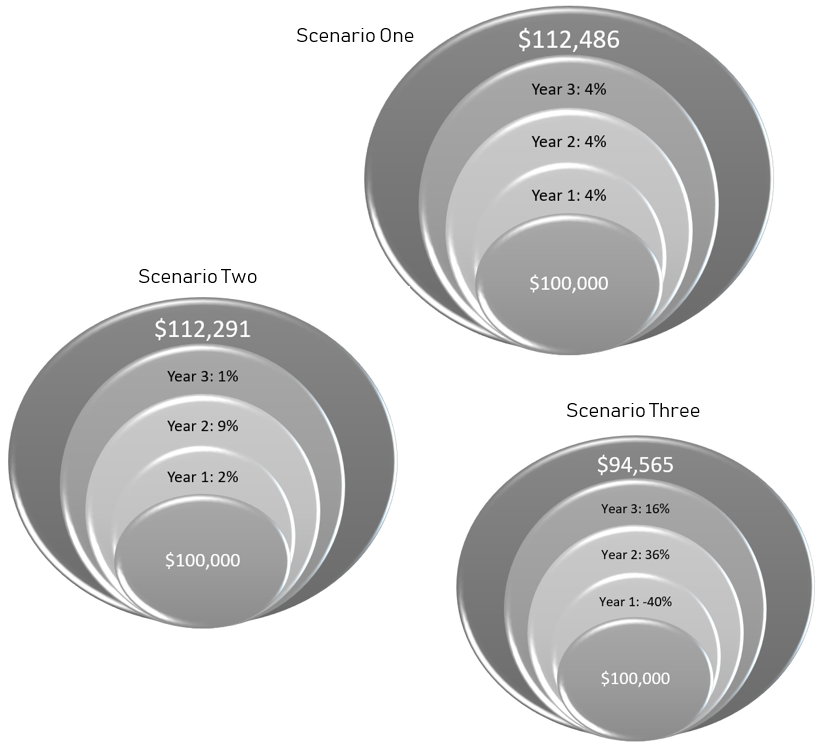 The impact of sequence of returns over the course of a multi-decade retirement is generally much greater.  Since 1926, the S&P 500 has posted an annual average return of just under 10%.  However, during that 92 year period, the annual rate of return fell between 8% and 12% just six times.  The remaining 86 years posted returns that were sometimes well above or below that average range.   Over that same period of time,  for the years that experienced a positive rate of return, the average return was 21%.  The average negative year was 15%.  With this level of volatility, the order of your returns may have a greater impact than your average rate of return.

So...  What's the worst that could happen?

If you retire at the "wrong" time.  Specifically, if you experience a substantial market downturn in the first few years of retirement, the impact is likely to be much greater than if you have some bad luck in the market further down the road.  The effects of market losses are magnified when drawing on assets to meet your income needs.

The same principle applies to other assumptions typically incorporated in future planning.  While inflation may (or may not) average 3% over the course of your retirement, the rate of inflation will not be exactly 3% every year. Your effective tax rate will likely ebb and flow over time.   You need to be ready for a broad range of potential outcomes in these and other areas.

Some of the more sophisticated calculators attempt to address this shortcoming by incorporating a Monte Carlo simulation.  Instead of projecting a repeating rate of return, a Monte Carlo simulation will typically run up to 10,000 different potential scenarios and provide a range of possible outcomes and probabilities.  Once again, the range of outcomes used in the simulation will have a disproportionate impact on the net results.  Most of these models use historical return and volatility data for different assets classes in their projections.  Often, the "historical" data represents averages of just a few decades of past data and offers very little predictive power for future outcomes.

The 20th century provides numerous examples that illustrate how the recent past and the near future frequently bear no resemblance to one another.  As Nassim Taleb succinctly stated in his 2007 book,  The Black Swan, the Impact of the Highly Improbable, it is difficult if not impossible to make accurate future projections by leaning on past data.

Discussions of financial risks during the roaring 20s are usually limited to the looming stock market crash and The Great Depression.  However, those that managed to maintain and grow fortunes during this period of time faced another unforeseen challenge in dramatically increasing tax rates on high incomes.

For most of the 1920s, the top marginal tax rate was about 25%. By the mid-1940s the top marginal rate had soared to 94%.  The bottom tax rate was now 23% and middle income families often fell in brackets ranging from 33% to 50% or more.  From the vantage point of the 1920’s it would have been almost impossible to foresee a decade long depression followed by several years of global conflict leading to large debts and higher tax rates to pay down those debts.  This is what Taleb would call a Black Swan occurrence, in this case as it relate to tax policy. 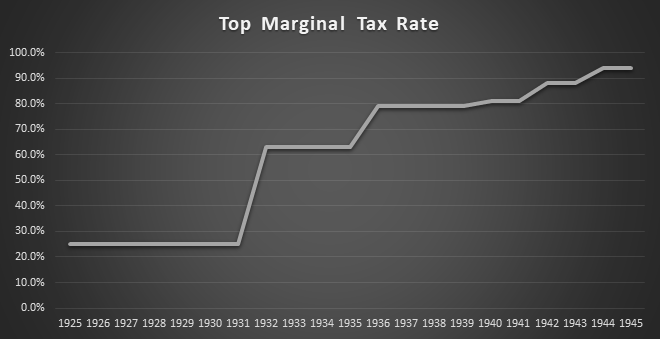 Similarly, inflation was very low through the 1950s and most of the 1960s, with the consumer price index exceeding 3% only once between 1950 and 1967. If a 60 year old sat down with a retirement planner in the mid-1960s, what rate of inflation or range of rates of inflation do you think they would have used for the future?  In all likelihood the vast majority of planners, economists and Congressional Budget Office projections assumed that future inflation rates would mirror the recent past.  However, the future proved to be very different.  Between 1969 and 1982, inflation, as measured by the annual change in the Consumer Price Index, exceeded 5% in all but two years.  Four of those years registered double digit increases with a peak of 13.5 % in 1980.

A dollar stuffed under a mattress in 1969 would have provided the equivalent of less than 40 cents of purchasing power in 1982.For those on a truly “fixed income” this could have had a devastating impact on their ability to meet their basic financial needs. 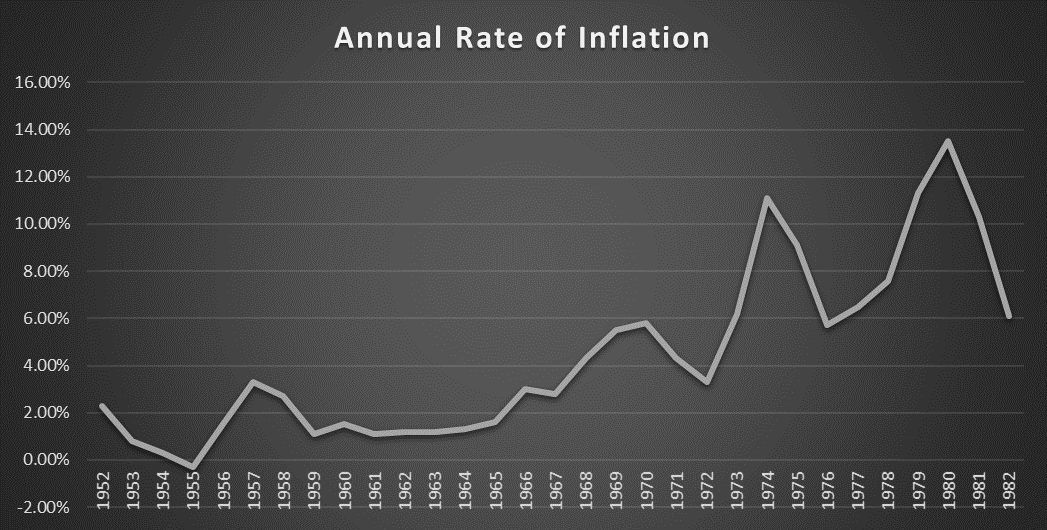 More recently, the 1990s were a great time to be in the stock market.  $100,000 invested in the S&P 500  on January 1st 1990 would have grown to more than $600,000 by 1999.    Many self-proclaimed financial gurus told us this was the new normal and the stock market might just go up forever.  The more practical and realistic pundits recognized that stock prices were well above historic norms by most conventional metrics.  Some projected that future returns may be more modest than past returns due to current valuations.  Yet, even the most pessimistic of projections likely failed to see what the next decade would bring.  Between 1999 and 2008, the S&P 500 registered an average return of -3%. 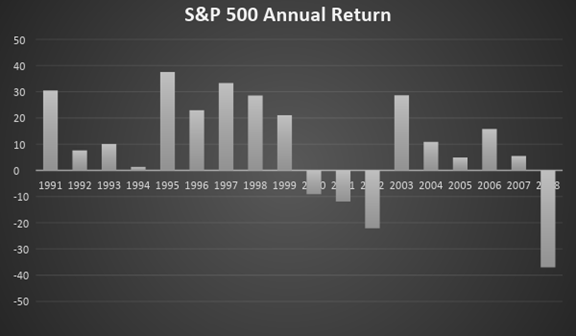 There is a good chance that your retirement experience will not include a marginal tax rate of 94%, double digit inflation or a lost decade in the market.  Recent history reminds us that these outcomes, while unlikely, are possible.  The most important takeaway from these events should be that we need to expect the unexpected.   These so called “Black Swan” events are so improbable they are almost impossible to predict or anticipate.  To borrow an excellent illustration provided by Taleb in The Black Swan, let’s look at the life of a turkey in narrative and chart form.

"Consider a turkey that is fed every day," Taleb writes. "Every single feeding will firm up the bird's belief that it is the general rule of life to be fed every day by friendly members of the human race 'looking out for its best interests,' as a politician would say.

"On the afternoon of the Wednesday before Thanksgiving, something unexpected will happen to the turkey. It will incur a revision of belief." 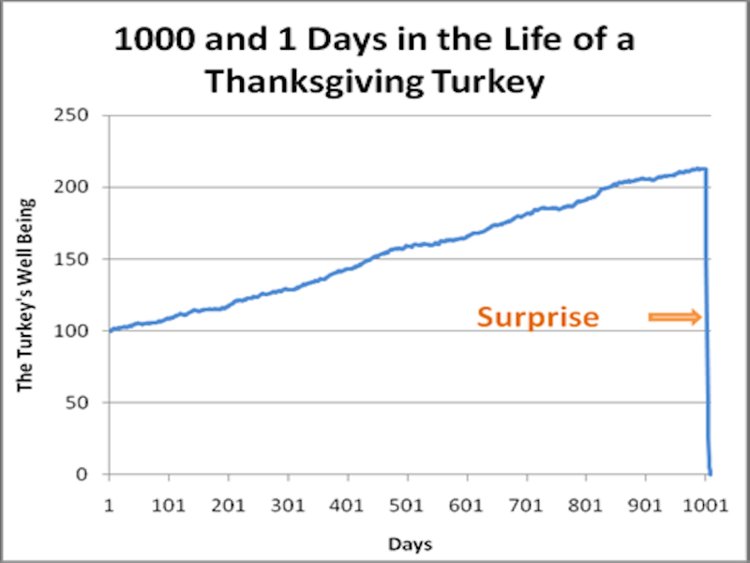 "Consider that [the turkey's] feeling of safety reached its maximum when the risk was at the highest!" Taleb writes.

Inductive reasoning, as illustrated above, is the basis of almost all financial modeling.  Average returns, average volatility, average rates of inflation and other rear view mirror data can tell us quite a bit about the past.  However they can lead us in the wrong direction when we try to plan for the future.

Pessimistic planning is much more difficult than its more upbeat alternatives.  While we may not know the magnitude or even the type of challenges that lie ahead, approaching the planning process with a worst case scenario attitude is a good start.  Sound retirement planning does not involve trying to figure out how your plan could work in the future.  By focusing more on the circumstances under which your plan may not work, you will gain a better understanding of the real risks that you may face and your ability to withstand them.   While this may sound like a lot of doom and gloom,

The best part about planning for the worst case scenario is that if you do your job correctly, there should be only two possible outcomes.  Either your assumptions will be proven correct or you will be pleasantly surprised.